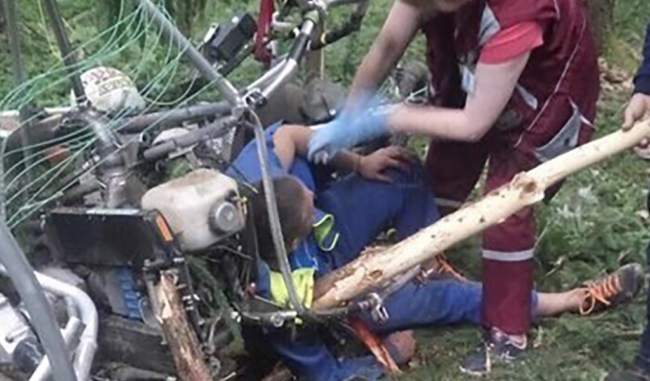 One of the inherit dangers that comes with flying ultralight aircraft is their uncanny ability to be magnetically attracted to the ground for some reason as a pilot in Belarus found out. Luckily while the injury was serious he was able to make light of the situation.

Getting impaled was one of the most gruesome ways to die during the middle ages. It was especially popular in Central and Eastern Europe. However this time it was not on purpose but it was an pilot crashing and getting impaled by a massive tree branch. One Belarusian pilot, Ivan Krasouski, took impaling to another level entirely when his paratrike crashed into woodland and he found himself the proud owner of what is probably the biggest splinter in the world. Ivan Krasouski enjoys the adrenaline when he flies his paratrike, especially over Belorussian pretty countryside not far from Minsk, but then it happened, a strap snapped and he span out of control reports Mirror.

The 36-year-old crashed into woodland and a sharp branch impaled his shoulder as he made his landing. He would have bleed out if they pulled the branch out of his shoulder, so they cut him free from the wreckage and carted him off to hospital with the branch still in place.

“I’m thinking, ‘I fell so softly, all is okay,’” he said in hospital. “‘I’ll stand up and go…’ then… something holds me back. I looked and it was a giant log there. I tore my shirt and there was a branch in my arm, thick as a watermelon.”

“Many people came. I told them – ‘Take out this splinter’,” he said in the video.