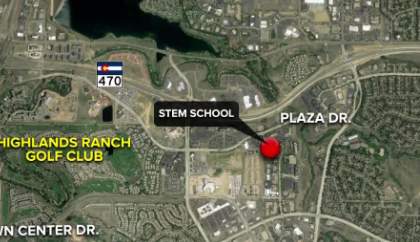 Breaking! A shooting left 8 injured and 1 dead at a stem school in Colorado. The situation was described as Unstable according to the sheriff.

FoxNews reports
Two suspects were in custody Tuesday night after a shooting at a Colorado high school left at least one person dead and eight others injured, according to authorities.

The suspects were identified as 18-year-old Devon Erickson and a juvenile accomplice. The shooting took place at a STEM school in Highlands Ranch, a Denver suburb only about 7 miles from Littleton, site of the infamous Columbine High School mass murder in 1999.

“It is with extreme sadness that we can confirm that 1 student at the STEM School was killed in today’s #stemshooting incident,” the Douglas County Sheriff’s Office wrote in a Twitter message. “The immediate family has been notified.”

It is with extreme sadness that we can confirm that 1 student at the STEM School was killed in today’s #stemshooting incident. The immediate family has been notified. Douglas County Coroner Jill Romann has not officially identified the student is stating it’s an 18 year old male.

The coroner has not officially identified the student who died, but said the victim was an 18-year-old male.

Authorities said they believe both Erickson and the juvenile suspect were students of the school, Douglas County Sheriff Tony Spurlock said at a news conference. Neither suspect was previously known to authorities, he added.

The suspects “walked into the STEM school, got deep inside the school and engaged students in two separate locations,” the official said. “There were a number of students that were shot and injured.”

Of the eight students taken to nearby hospitals, several were listed in critical condition, according to Spurlock. But at…

This is a developing story we will keep you updated as more informations becomes available!

#stemshooting, at 1:53 pm responded to STEM school off Ridgeline Blvd in HR on call of shots fired in school, first update, 2 injured, deputies in process of identifying and locating shooter(s). Still active and unstable scene.