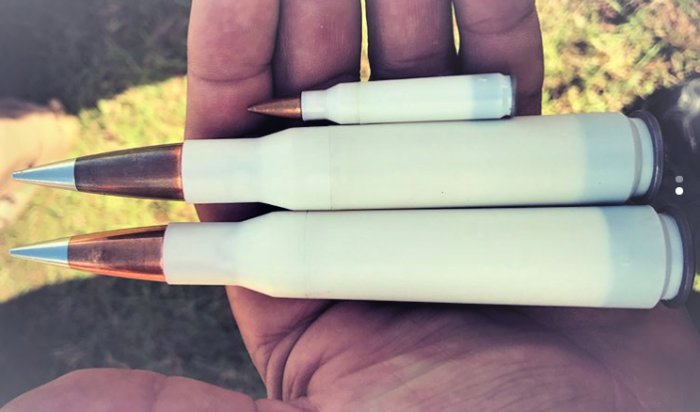 There you are, in your stall getting ready to mag dump your shiny new B&T when you hear shuffling behind you. Being at the range you aren’t concerned so you fuckin send it. As soon as the noise stops your hear, “THATS NOT SAFE ONLY ONE SHOT PER SECOND!”

You pause for a second clearly confused as that was not in the range rules.

Your worry turns to annoyance as you look back expecting to see a range officer but instead see some old geezer with a 1911 on his hip uncross his arms and start to pick up YOUR BRASS before you even get a chance to insert a second magazine.

Well worry no more. Like the way of steel frames Ammunition is getting a POLYMER make over soon the fudds wont even bother invading your personal space… or lane to steal your brass. Because there fucking wont be any. Right now it only appears to be in a few rifle calibers however it probably wont be long before this becomes available for pistols.

A company called True Velocity is doing just that. As a aircraft weapons guy this is amazing. Because this will help with those pesky weight and balances that have to be done before every flight. Often some ammunition might have to be taken off the aircraft due to having too much weight.

In fact True Velocity has already opened a 60,000 square foot plant in Texas.

Even the ARMY has selected True Velocity for their next gen squad weapon program which can be seen in True Velocity’s press release below;

“True Velocity’s 6.8mm composite case design produces a level of performance, consistency and efficiency never before seen in small arms ammunition,” said Chris Tedford, president and chief operating officer for True Velocity. “Combining True Velocity’s innovation and technology with the expertise of General Dynamics OTS and Beretta results in a weapon system solution that exceeds NGSW requirements and provides the U.S. Army with a definitive edge on the field of battle.”

Will composites take over? Only time will tell. Though we’d love to hear your input.