The Philadelphia arm of the Black Lives Matter movement has called for the “complete abolition” of the police department in five years as well as the scrapping of military bases abroad.

For more than a month, in the aftermath of George Floyd’s death, the Black Lives Matter (BLM) movement has called for sweeping changes across the country in the bid to end racial injustices. At the heart of the debate is the campaign to defund – or dismantle – police departments.

And according to BLM Philadelphia representative and activist YahNé Ndgo, the chapter has developed a five-year plan to do just that.

“One of the things that we are demanding over five years is the complete abolition. We don’t want to see any police in our community,” Ndgo told Fox News in an interview Tuesday. “Over the course of those five years, it gives time for the community to begin to build what is needed. We aren’t looking to leave any kind of vacancy around the issue of safety.” 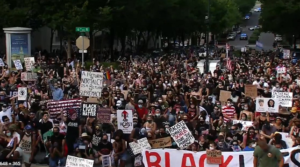 From her purview, one of the main factors leading to crime is poverty and hunger – which in turn drives drug use and drug-related crimes.

“As we address these particular concerns, and at the same time build restorative justice practices, and build out our mental health response teams, and build medic responses,” she said, “[These are] responses that really actually deal with the issues that are in place. Then we will have less crime anyway.”

Ndgo said the community should deal with the issues from “the ground up,” using the money that would have otherwise been poured into the city’s police department.

“There are plenty of people who have been murdered as a result of mental health checks. The police came, and then they murdered the person, even though the person was acting erratically, which is what you would expect of a person who’s having a mental health crisis,” Ndgo said. “Domestic confrontations are also things that police are often called for. And these are kinds of situations that can be handled by different kinds of professionals. As it relates to more violent crime, there would still be trained individuals who are prepared to handle those kinds of situations.”

“Quite often, if there is violence happening, by the time the police arrive, that has already occurred and particularly in poor neighborhoods and in black and brown communities. So the police are not really a resource for preventing that kind of crime from happening. Just a response,” she explained.

Moreover, the Philadelphia-based activist believes that violence exists on many levels, not just stemming from law enforcement.

“We also recognize that hunger, unnecessary hunger, is a form of unnecessary homelessness (especially) when you have massive numbers of properties that are empty, and then we have people who are all over the city. We see that also as violence,” Ndgo said. “Another example is the fact that a lot of our schools are not safe for our children. There is lead pipes in a lot of the schools. So students are being expected to learn in environmentally hazardous places, those are things that we see as violence.”

She said when BLM has called for these changes, they are presented with government promises she calls a sort of “smoke and mirrors.”

“(The administration wants) to come across as if (they are) responding to the demands that people are making, but they’re not genuine responses,” Ngdo said. “An example is one of (our) demands to decrease the police budget.” 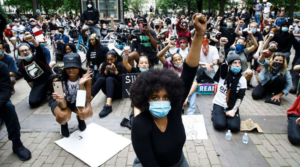 “It just increases the resources to these police terror groups. And so shifting those resources from that, you have these federal resources that are being used in these ways that could easily be shifted into the communities to address these issues around poverty,” Ngdo said. ‘

She pointed out that “there are over 800 U.S. military bases around the world,” in addition to the Pentagon’s AFRICOM program, “which puts military bases in almost every country on the African continent.”

According to Pentagon maps published by The Intercept in February, there appear to be U.S. bases on 29 of the 54 countries that make up Africa. Those bases, she said, should be defunded.

“(Defunding) these particular programs would provide massive amounts of resources for the communities in the United States, and that would mitigate most of the problems that create the so-called problem of crime,” Ngdo said.

In terms of BLM Philadelphia, Ngdo wouldn’t give membership numbers but said the group is made up of a number of educators from elementary to university level and that everyone has a different focus – with children’s safety and education at the hub of their discussions and policy proposals.

Despite the unrest of the past few weeks, Ngdo is optimistic that real change is coming – exemplified by the recent bringing down of the statue commemorating former police commissioner Frank Rizzo, who she defined as “very aggressive, very racist and very violent” in his response to Black communities.

Unlike BLM protests that have happened in years past, Ngdo believes this time is different.