Reps. James Comer and Jason Smith, the ranking members on the House Oversight and Budget committees, wrote to Acting Office of Management and Budget Director Shalanda Young expressing concern about a plan for a “conditional cash transfer program” to address the “root causes” in Central America leading to the border crisis. 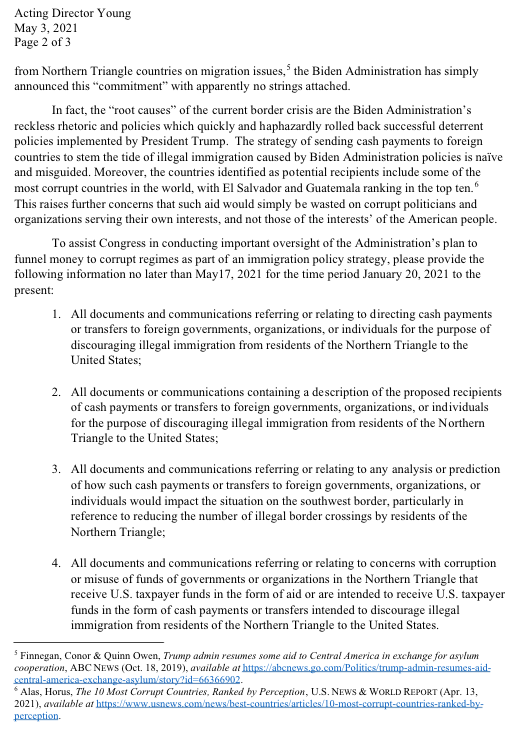 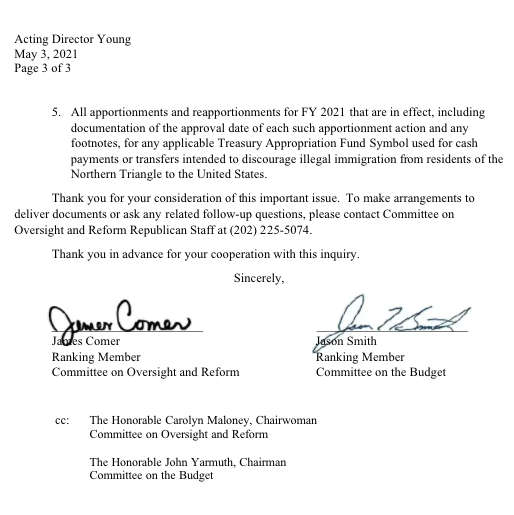 “In the midst of a border crisis propelled by the Biden administration reversing successful deterrent policies, it is worrisome that the administration’s solution isn’t to reinstate those policies or replace them with workable solutions, but instead to funnel more money to pay countries to dissuade their citizens to break U.S. laws, particularly countries with corruption concerns,” the letter, obtained by Fox News, says.

Roberta Jacobson, the White House’s outgoing southern border coordinator, told Reuters about the proposal last month and said it would be targeted at Guatemala, Honduras and El Salvador — three Northern Triangle countries that are the source of much of the migration coming to the border.

“We’re looking at all of the productive options to address both the economic reasons people may be migrating, as well as the protection and security reasons,” Jacobson said.

Jacobson did not say who would receive the cash or how it would work, but she promised that the government “isn’t going to be handing out money or checks to people.”

The U.S. Agency for International Development (USAID) told Reuters it is already using cash transfers in Central America “to help people meet their basic needs” after recent hurricanes and is considering expanding such measures.

“The strategy of sending cash payments to foreign countries to stem the tide of illegal immigration caused by Biden administration policies is naive and misguided,” the lawmakers write. “Moreover, the countries identified as potential recipients include some of the most corrupt countries in the world, with El Salvadaor and Guatemala ranking in the top ten.”

Biden has proposed major financial injections into Central American countries before, both in office and in the 2020 campaign — pushing a $4 billion plan to invest in tackling what he calls the “root causes” of the crisis like gang violence, climate and economic instability.

Comer and Smith noted that Biden’s FY 2022 discretionary budget request includes $861 million in financial assistance to address “root causes” of “irregular” migration — which the request calls a first step toward that $4 billion.

Instead of the “root causes,” like poverty, violence and climate, they call on Biden to reinstate Trump-era policies, like the Migrant Protection Protocols (MPP) and the cooperative agreements.

“President Biden should reinstate President Trump’s cooperative asylum agreements with Northern Triangle countries, utilize the Migrant Protection Protocols, end catch and release, and maximize his authority to expel illegal immigrants during the pandemic,” Comer told Fox News. “Paying people to not commit a crime sends the wrong message, harms hardworking American taxpayers, and does nothing to end the border crisis.”

“Hundreds of millions, if not billions, of dollars are already being spent as a result of the Biden Border Crisis even while the President’s budget request holds funding flat for the Department of Homeland Security,” Smith said. “Rather than searching around for more misguided policies to pile on to their existing failures, President Biden and his team ought to look at what was working before they came into office.”