During Thursday’s presidential debate, O’Rourke described AR-15s and AK-47s as “weapons of war” and stated, “Hell yes, we’re going to take your AR-15, your AK-47. We’re not going to allow it to be used against your fellow Americans anymore.”

O’Rourke had a much different stance when he was running for Senate according to FoxNews. During an interview on “The Chad Hasty Show” in April 2018, the host asked: “I own an AR-15. A lot of our listeners out there own AR-15s. Why should they not have one?”

“To be clear, they should have them,” O’Rourke responded. “If you purchased that AR-15, if you own it, keep it. Continue to use it responsibly.”

He added later in the same interview: “If you own a gun, keep that gun. Nobody wants to take it away from you — at least I don’t want to do that.”

However, in repsponse to Beto’s new statement a Texas representative had the most Texan comeback we could possibly imagine.

This is a death threat, Representative. Clearly, you shouldn’t own an AR-15—and neither should anyone else. pic.twitter.com/jsiZmwjMDs

Of course Beto was quick to retweet and make the claim that this was a death threat. Twitter removed the post citing it went against its rules regarding violent threats. O’Rourke’s press secretary Aleigha Cavalier told CNN’s Leyla Santiago that the campaign was reporting the tweet to the FB

Even Briscoe’s reply was removed. Which is puzzling because we’re still trying to figure out which rule it violated. Is there a rule against hurting Betos feelings? 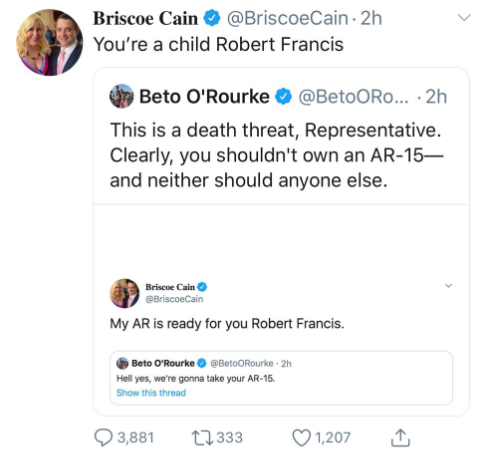 This just goes to show how far the left is willing to go to twist the words of anyone they do not agree with. Have a different set of morals and ideals? Well they are going to twist your words so they can report you to the authorities. This is the precedence they are setting for their followers. They want them to think that this type of behavior is acceptable. This is why Redflag laws and other draconian gun control laws must be stopped!

How can you do this?