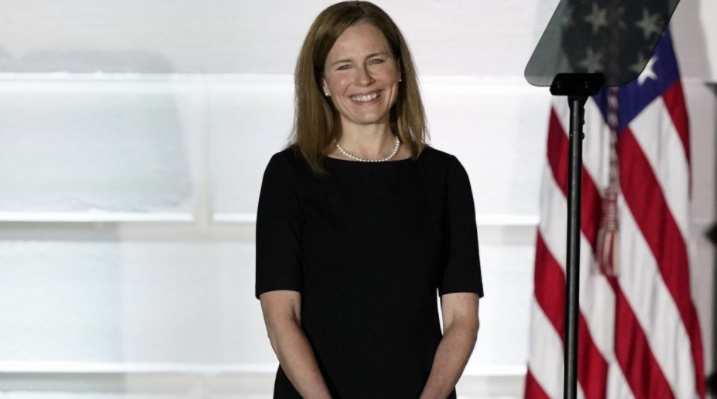 Barrett was the last of the justices to speak Monday as they grill lawyers in descending order of seniority to preserve order in the teleconference hearings during the pandemic. Before the arguments began, Chief Justice John Roberts said that it was his “great pleasure” to welcome his new colleague and wished her “a long and happy career in our common calling.”

The first case Barrett and the rest of the justices heard Monday morning was U.S. Fish and Wildlife Services v. Sierra Club. That case centers around granular administrative law on what exactly the government is required to disclose in response to Freedom of Information Act requests.

“You said that if a government official simply stamps ‘draft’ on it and sent it over, and as Justice Kavanaugh is positing did so in order to avoid FOIA disclosure requirements, you said that a court might look at other factors to determine whether it’s still final,” Barrett said in her first question as a justice. “What other factors would a court consider?”

In the FOIA-related case the court heard Monday, the government disputes that it must turn over some draft documents that it claims fall under the “deliberative process privilege” exemption of the Freedom of Information Act.

The Sierra Club, an environmental organization, argues that those documents should be available to the public.

“[The government’s] view of Exemption 5 suggests that materials FOIA explicitly makes public—interpretations, staff instructions, and policies with operative effect on later agency decisions—should, contrary to the statute, largely be secret,” Sierra Club said in a brief.

In response to Barrett’s first question, the government’s counsel argued that a court could investigate whether the label of “draft” was “pretextual.” He added that in such an examination he believed the government would succeed in this particular case.

Barrett responded that such an investigation would be “a pretty fact-intensive determination.”

As the conversation continued, she asked the government lawyer to clarify that its position is “your first order of preference would be the kind of formalistic line that I was just describing and then your backup argument would be if the court was uncomfortable about the possibility of avoiding FOIA obligations by simply stamping draft at the top that we go with the more kind of multi-factor, fact-specific test, you know maybe to see was the agency holding this out as a final opinion?”

The government lawyer said that was an accurate characterization of its argument.

When Barrett questioned the lawyer for Sierra Club, she first asked him to clarify an exchange that came with Justice Stephen Breyer.

The Sierra Club lawyer said that there is still some controversy on the issue.

Barrett followed up by asking the Sierra Club lawyer to distinguish between the practical and legal effects of the documents at issue.

“Why was it a legal effect as opposed to simply a practical effect when having this document caused the EPA to abandon the 2013 regulation and then move on to the 2014 regulation?” she said.

Barrett then interrupted the counsel’s answer to that question and said: “If the EPA simply got wind … of what the services were thinking and said, ‘well, it doesn’t look like this is going to be on a good track for us’ … and so abandoned it, that seems to be a practical consequence.”

She followed up: “How can a draft opinion give rise to that legal consequence?”

Barrett on Monday is also hearing arguments — along with the rest of the court — in another low-profile case, Salinas v. Railroad Retirement Board.

Things will heat up Wednesday and into next week, however, as the court gets into cases on more hot-button issues. On Wednesday the Supreme Court will hear Fulton v. City of Philadelphia, Pennsylvania, which is a case about whether or not a city can prevent a religious group that does not place foster children with same-sex couples from participating in its foster program.

Then on Nov. 9, the court will hear a case on immigration, and on Nov. 10 it will hear Texas v. California, the case about the constitutionality of the Affordable Care Act (ACA) that loomed large over Barrett’s confirmation process.