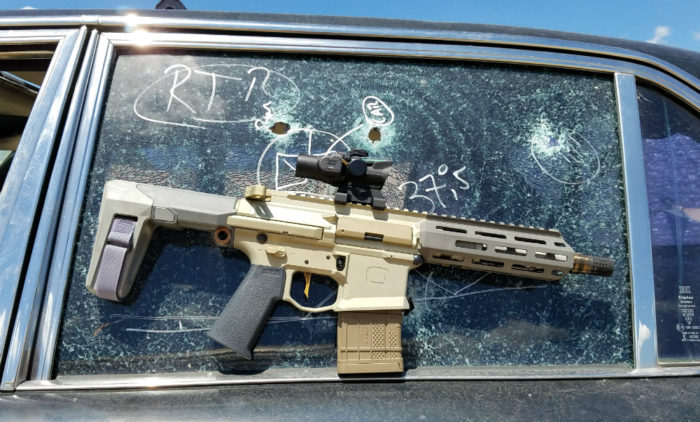 ATF has once again unlawfully and unconstitutionally exceeded its authority and changed the law by issuing a new determination that is devoid of logic and reason, contains no explanation as to the manner in which it arrived at its conclusion, conflicts with its prior determinations, and embodies the very essence of “arbitrary and capricious”. 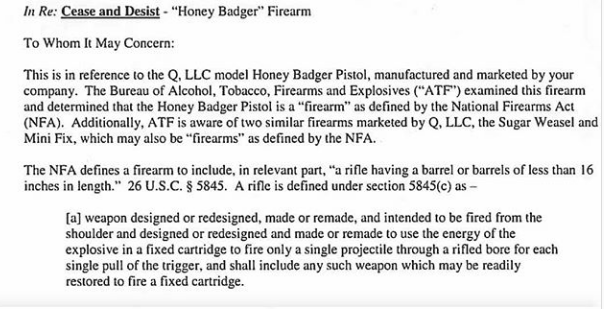 After examining a sample Q Honey Badger Pistol, the ATF’s Firearms and Ammunition Technology Division (FATD) concluded that “the objective features of the Honey Badger firearm, configured with the subject stabilizing brace, indicate the firearm is designed and intended to be fired from the shoulder.” FATD further concluded that it is a SBR as defined by the National Firearms Act (NFA) and Gun Control Act (GCA). Yet, ATF does not explain how it arrived at this conclusion other than vague generalizations that the firearm was “designed” to be fired from the shoulder and by virtue of its barrel length meeting the definition of a SBR.

FPC believes that the ATF, NFA, GCA, and every other law that threatens the People with disarmament and prison for exercising human rights should be abolished. Our legal team will continue to closely monitor this issue and take whatever action is necessary, possible, and prudent to protect the rights of law-abiding gun owners and our members against abusive government agencies and policies.

Check Out LEGALLY ARMED AMERICAS BREAK DOWN of what this means

CLICK THE FPC BANNER BELOW AND JOIN THE FIGHT TODAY!

Q, makers of the Honey Badger pistol, has just issued the following notice to its customers:

On August 3rd, 2020, the Bureau of Alcohol, Tobacco, Firearms and Explosives (“ATF”) issued Q® a formal Cease & Desist letter, notifying us that ATF has taken the position that the Q Honey Badger Pistol is a short-barreled rifle (“SBR”) regulated under the National Firearms Act (“NFA”).  In response, Q has ceased all production of the Honey Badger Pistol, and submitted a comprehensive letter to ATF and the Department of Justice (“DOJ”) stating why we disagree with this classification[1]. Additionally, we have provided recommendations on how to address the firearms already in circulation. Q is seeking solutions that best protect you, the individual, and Q’s distribution network from falling out of compliance with ATF regulations, and federal law. At this time, Q has not received any definitive guidance from the ATF.

In the meantime, Q encourages possessors of the Honey Badger Pistol to take these proactive measures until a resolution is reached between Q and ATF.

1. Complete one of the following:

A: Remove the barreled upper receiver from the lower receiver and dedicate it as a replacement
for another AR-style pistol or registered short-barreled rifle; or

B: If you do not possess another AR-style pistol or registered short-barreled rifle, remove the barreled upper receiver from the lower receiver and temporarily transfer it out of your possession by, for example, transferring it to the dominion and control of another individual; and

2. Once the previous step is completed, you may file an ATF Form 1 to register the lower receiver as a short-barreled rifle. Upon Form 1 approval, the firearm may be reassembled.

Failure to complete option a or option b could result in prosecution and is subject to a $10,000.00 fine and up to 10 years imprisonment.

If you are concerned with this situation – as Q is – we urge you to contact the Department of Justice (ATF’s parent agency) by using the below OneClickPolitics link.

Additionally, we encourage you to reach out to the White House and ask President Trump to halt and rollback ATF’s efforts to issue arbitrary and capricious decisions affecting millions of legal gun owners.

Residents from the following states and districts should reach out to their congressional representatives to let them know what they think of ATF’s actions:

Q takes extreme care to remain in compliance with federal law, and we share your frustration with this development.  We apologize for this situation and want to assure you that we, in conjunction with SB Tactical® and the National Rifle Association (NRA®), are doing everything in our power to resolve this matter amicably for all parties involved.