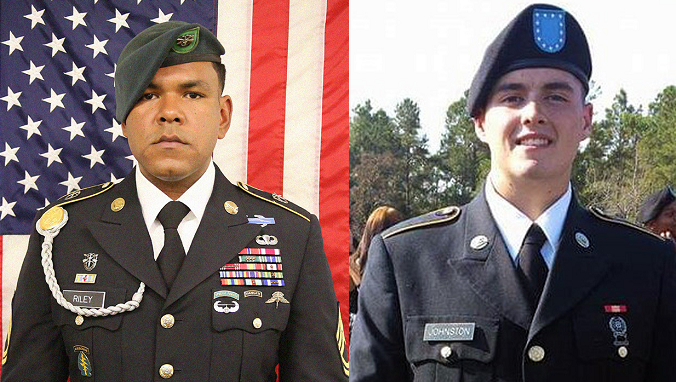 Two service members were killed weds during an intense firefight with the Taliban in the Tarin Kowt district, Uruzgan province, Afghanistan.

According to FoxNews Master Sgt. Micheal B. Riley and Sgt. James G. Johnston were killed in action AfghanistanWednesday. Both men died from small arms fire while engaged in combat operations in the Uruzgan Province supporting Operation Freedom’s Sentinel.

Riley, 32, was born in Heilbronn, Germany, and was on his sixth deployment to Afghanistan. Johnston, 24, was born in Trumansburg, New York, and joined the military in 2013.

“It is with a heavy heart that we learn of the passing of Master Sgt. Micheal Riley in Afghanistan,” Col. Lawrence G. Ferguson, commander of the 10th Special Forces Group (Airborne), said. “Mike was an experienced Special Forces non-commissioned officer and the veteran of five previous deployments to Afghanistan. We will honor his service and sacrifice as we remain steadfast in our commitment to our mission.”

I am directing that flags on state government buildings be flown at half-staff starting tomorrow in honor of Sgt. James G. Johnston, a Trumansburg, NY soldier who died as a result of injuries sustained in Afghanistan.

I extend my sympathy to his loved ones and fellow soldiers.