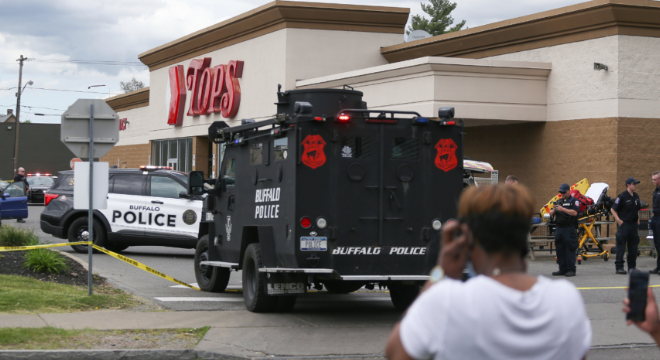 During a press conference, Buffalo police commissioner Joseph Gramaglia said that 13 people were shot, and 10 people died as a result of the shooting, which is being investigated as a hate crime.

Gramaglia said that an 18-year-old White male allegedly committed the shooting and was live-streaming it online.

According to officials, the shooter traveled from “hours” outside of Buffalo. The shooting happened at Tops Friendly Markets on Jefferson Avenue in Buffalo.

“BPD on scene of a mass shooting at the Tops in the 1200 block of Jefferson Avenue. Police say multiple people have been struck by gunfire. The shooter is in custody. Motorists and residents are urged to avoid the area,” the police department tweeted.

The alleged gunman has been identified as Payton Gendron, 18, of Conklin, New York, according to the Associated Press.

He is being charged with first-degree murder, and pleaded not guilty on Saturday evening, according to WKBW.

11 of the victims in the attack are Black and two of them are White, according to authorities.

Among the people killed are a retired Buffalo police officer, who fired multiple shots at the gunman but hit his bulletproof vest.

Three people were killed in the parking lot of the grocery store, according to Gramaglia.

The Erie County Sheriff’s Office said in a tweet that it has ordered “all available resources and personnel” to assist the Buffalo Police Department in responding to the shooting.

During a press conference, Hochul said the suspect committed an “act of terrorism.”

“And to see that sense of security shattered by an individual, a white supremacist who has engaged in an act of terrorism and will be prosecuted as such in a cold-hearted, cruel, calculating way, a military-style execution targeting people who simply want to buy groceries in a neighborhood store,” Hochul said.

Hochul also criticized a social media company for not acting sooner to pull the video off of its platform.

“These outlets must be more vigilant in monitoring social media content. And certainly the fact that this act of barbarism, this execution of innocent human beings could be live-streamed on social media platforms and not taken down within a second, says to me, that there is a responsibility out there and we’re going to continue to work on this and make sure that those who provide these platforms have a moral and ethical, and I hope to have a legal, responsibility to ensure that such hate cannot populate these sites,” Hochul said.

A spokesperson for Twitch, an online streaming platform, told Fox News Digital that a user has been suspended from Twitch after the shooting.

“We are devastated to hear about the shooting that took place this afternoon in Buffalo, New York. Our hearts go out to the community impacted by this tragedy. Twitch has a zero-tolerance policy against violence of any kind and works swiftly to respond to all incidents. The user has been indefinitely suspended from our service, and we are taking all appropriate action, including monitoring for any accounts rebroadcasting this content,” the spokesperson said.

The spokesperson also said that the incident took place during a live broadcast, and the company will work with law enforcement during the course of their investigation.

The spokesperson also said that the live stream was taken down within two minutes.